Teaching scientists how to better communicate with each other and the public.

Scientists aren't typically ​known for their stellar ability to communicate, but that's only because they are trained to communicate like scientists. Don't get me wrong, formal science communication skills are necessary for writing killer journal articles, but they aren't as effective when interacting with folks outside of one's discipline. My goal is to build strong science communication skills that are, at times, counter to the decades of training scientists receive throughout their careers. The good news is that most scientists are eager to learn and adopt new approaches to engagement.

​Read below to learn more about my work in science communication training.

American Association for the Advancement of Science (AAAS)

For 43 years, this highly competitive program has placed advanced student scientists, engineers, and mathematicians at media organizations nationwide. Fellows work as reporters at media outlets such as the Los Angeles Times, National Public Radio, and Scientific American using their academic training in the sciences as they report today's headlines, sharpening their abilities to communicate complex scientific issues to non-specialists. The fellowship program is designed to enhance coverage of science-related issues in the media in order to improve public understanding and appreciation of science and technology. Hear from the 2013 Fellows in the video below:

For 3 years, I was the Director of the AAAS Mass Media Science & Engineering Fellows Program, independently managing all aspects of the Fellowship, including fundraising, program development, marketing, and budgets. My responsibilities encompassed all activities associated with the implementation of the program, including recruitment, the selection process, selection committee oversight, trainings, Fellow placements, and reporting. My excitement for science communication and my complete dedication to the program was palpable, evidenced by large programmatic changes that reinvigorated its mission and resulted in rapid growth under my direction. ​
Before my arrival, the Fellowship had seen a steady decline in sponsorship for more than a decade; a decline in funding directly correlated with a decline in the annual number Fellows. After a few months under my direction, funding grew from supporting 11 Fellows to 15 Fellows. Within 2.5 years under my leadership, the program doubled to 22 Fellows, a result of an 80% increase in external funding to the program. In addition to the increase number of funding sources, I was also able to forge new media partnerships with Slate, WIRED, National Geographic, Discover Magazine, CNN, KQED, NOVA, and PBS News Hour.

During my time as Director, I introduced a suite of new marketing materials including: a new website, online application, online review process, videos (one shown above), postcard, pop-up banner (shown below), and the program’s first social marketing campaign.

In addition, I developed and administered, for the first time in the Fellowship's history, an alumni survey (55% response rate). The survey improved and expanded alumni database from 81 to 369 alum, thus preserving the Fellowship’s 40-year legacy and expanding networking opportunities for Fellows. Results were presented at the Fellowship's 40th Anniversary Celebration in Washington, DC and at the 2015 AAAS Annual Meeting in San Jose, CA.
​
Most notably, I created a new branch of the Fellowship that places Spanish speaking scientists in Spanish language news outlets to report scientific developments relevant to Spanish-speaking communities.
AAAS news story on 40th anniversary
Science magazine article on 40th anniversary
2013 Fellowship news story
2015 Fellowship news story 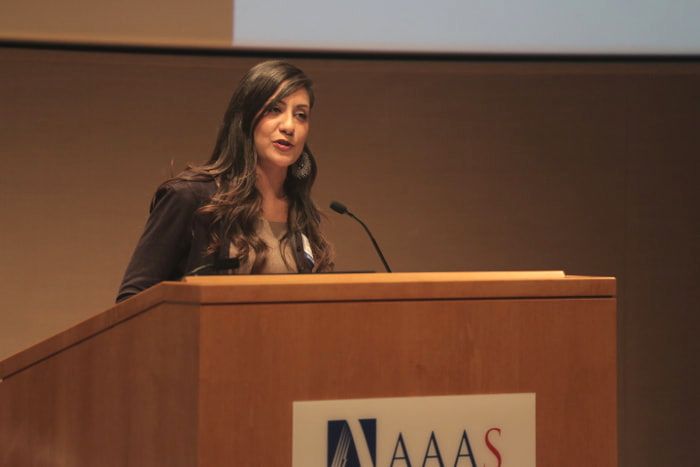 In April of 2016, I was invited to give a two-day workshop to students in an interdisciplinary doctoral program at the Center for Research and Interdisciplinarity in Paris, France. The program promotes ambitious research projects involving interactions between a wide range of academic disciplines in the pursuit of understanding living systems, education, and discovery. In addition, the program combines research experience gained in the lab with interdisciplinary activities (e.g., like a science communication workshop) taught through the doctoral school.